Your vocalist is most often the "selling point" of your band. The vocals transmit feeling and mood on a level unparalleled by the instruments in your band. It's also the first thing people concentrate on when listening to your songs. This is where the sheep are separated from the goats. Let's dive into the world of getting ready to record vocals, be it growls, clean singing or something in between. This is the most important phase in recording music. Make it count. 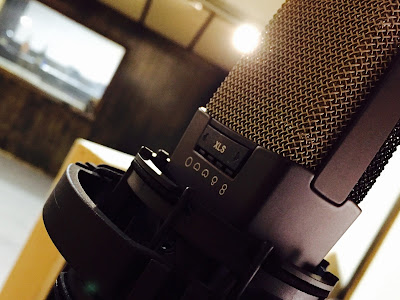 A singer is pacing back and forth in the studio hallway and doing his warm up exercises. He is clearly stressing the situation, although he is making his best efforts to not let it show. I'm setting up a bunch of mics in the live room. I have a faint idea of the vocal sound that would be suitable for the songs and the style, but we'll see. It's always impossible to say beforehand which mic suits the singer the best.
We go thru six mics singing from verse till the end of the chorus. The specific song is selected so that it has most of the prominent vocal styles of the singer. It's important to make sure the mic suits the low growls in the verse as well as the high pitched squeals in the chorus. Or maybe we need to track those separate with different mics for both. Let's investigate.
After fifteen minutes of going thru the mics a sudden realization hits me, somehow I'm not getting the vibe from the singer. He sounds wimpy, although he is a full bearded and long haired viking with arms as thick as my legs. I've heard him on shows sounding like a Balrog and at the moment comparing him to Gollum would be stretching it. He is clearly stressing the situation and not feeling it. I ask him to come to the control room. I start a casual conversation about his past recording experiences and what he is used to. After a few minutes of chatting, I tell him to grab a few beers from the fridge as I fetch the SM7b from the live room. I give the mic to him, hit the space bar, crank the monitors, he starts growling and lo and behold: suddenly he sounds just like he looks. A 260 pound viking is attacking thru the monitors. Great! Now we are talking.

Recording vocals is often much more of a mind game than something overly technical. Here you have a few tips on how to calm the turmoil in your head and start bringing out the best in you.

So there you go. Have fun singing and let the feeling shine thru. That's the reason why people buy albums and sing along at your shows. Just shoot me up if you have any questions or horror stories of engineers concentrating too much on engineering.

SoundSpiral Audio
SoundSpiral Audio is a professional recording studio located in downtown Kouvola, in southern Finland. Juho Räihä's Adventures in Audio is a blog that passes the accumulated knowledge in recording to you. The goal is to enable you to capture your Metal music without hickups.